Is Zcash Worth Mining and Investing? Read My Honest Review!

I noticed that hundreds of people are asking questions about this cryptocurrency on Google, “Is Zcash worth mining? Is Zcash a good investment? What is Zcash all about?”

Therefore, I decided to write this article to answer your questions. I believe you’ll find my Zcash review helpful and valuable. If you have any questions and comments after reading my article, you can always leave a comment below and I’ll be more than happy to help you out.

Is Zcash Mining Profitable? What About Investing? – Video Review

Before you dive into my full Zcash review below I want to give you an opportunity to have a look at my Zcash video. Then you can read more details below after watching the video.

Short Review: Zcash falls into the “same category” with Monero and other privacy-focused cryptocurrencies. If you think that they have a good future, investing in Zcash is a reasonable option. Mining Zcash is more profitable than mining many other coins but I still think it’s not worth my/your time. In my opinion, there are better ways to make money online than mining cryptocurrencies.

Zcash is a decentralized open-source cryptocurrency just like pretty much all of them. However, it puts a higher emphasis on privacy than Bitcoin, for example. It means that in transactions the sender, recipient and value are hidden on blockchain. Zcash is often compared to another privacy- and security-focused cryptocurrency called Monero.

Zcash has a nickname, “SSL version of Bitcoin”.

Zcash transactions are extremely fast and sometimes it has taken only around 6 milliseconds to verify a transaction. In that sense Zcash can be compared to Dash which is also famous for almost immediate transactions.

Benefits of Zcash – And Some Controversy Around It

Zcash has several obvious benefits compared to many smaller and unknown coins. They show their team transparently and openly. Many people are saying that the team behind Zcash is full of “cryptocurrency experts” who have a long background in the industry.

Of course, nobody yet has a huge experience because these technologies are relatively new but there is still a great difference whether founders have 1 or 7 years with cryptocurrencies. We can confidently say that Zcash is far from dishonest coins like BitConnect, for example.

Fast transactions and high security/privacy can also be seen as great benefits. Usually, everyone wants to keep their money safe so other people can’t see the transactions. But it has also some drawbacks.

There has been also some controversy around Zcash just before its launch. Around 10 percent of all coins were mined within a short period of time so founders got their own big part of the cake. The price of Zcash was also pretty high right after the launch but it dropped quickly close to 0. It started a steady rise in the Spring of 2017 like many other coins and the value exceeded momentarily $1 billion before the end of 2017.

Is Zcash Worth Mining?

Yesterday we talked about Vertcoin and said it’s one of the most profitable coins for mining. Still, we came into a conclusion that mining Vertcoin isn’t most likely worth it because there are many more profitable ways to earn money online.

As I mentioned in my Vertcoin review, mining cryptocurrencies won’t make you rich. That applies also to mining Zcash. Yes, you can earn some money with mining but not very much. People have been able to earn around $10 by mining Zcash but I think the rates are even going down.

Mining cryptocurrencies is mostly passive income which means that you don’t need to work but money still keeps on coming in. Still, you need to have a computer, pay for the electricity, check that the computer is mining and so on. It doesn’t make much effort but if the reward is less than $10 per day I don’t think it’s worth it. That’s why I don’t do it myself.

I would love to hear your opinions in the comments below this article. Do you have some experience of mining different crytpocoins? 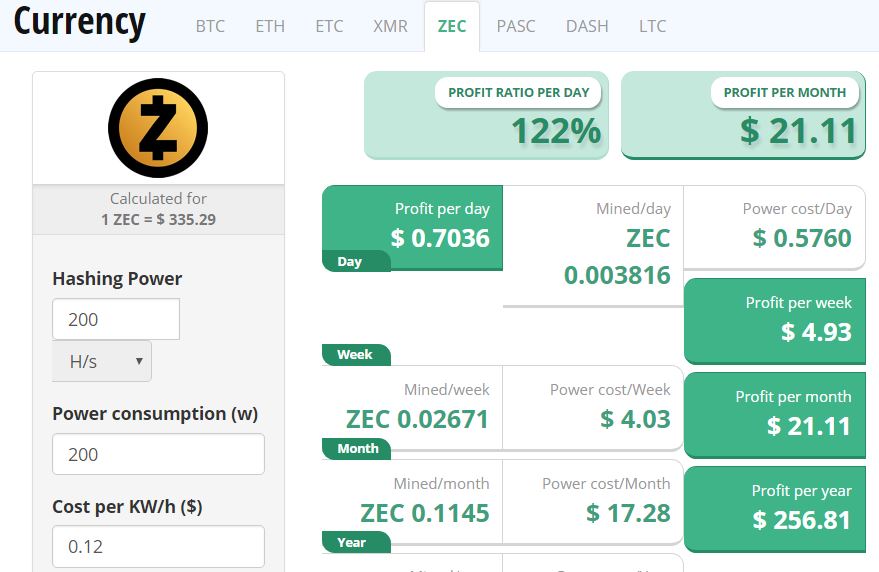 You can see estimated earnings of Zcash mining on several different websites.

Is Zcash Worth Buying?

Now when I am writing this, we are coming to the end of the year 2017. The market cap of Zcash is almost $1 billion.

When the price has grown from less than $40 to more than $300 in under a year, many people are wondering whether the coin is still worth buying or not. Actually, the same phenomenon has happened to almost all cryptocurrencies.

Pretty much all cryptocurrencies started rapidly rising in the Spring of 2017. The prices doubled, tripled and quadrupled. Some prices went from 1 to 50 within a few months. That was insane. It was probably the first time when a big audience and masses started hearing about these new technologies.

Now the popularity of the blockchain technology and cryptocurrencies is growing even more and I believe that the price of Bitcoin will pass $50,000 during 2018. Then the question is, “What will happen to Zcash?”

My prediction is that the value of Zcash will keep on going up also in 2018. They have a potential coin and an experienced team of developers so I don’t see any reason why it wouldn’t rise. However, I am not yet 100% convinced about the long term value of Zcash.

Conclusion – Is Zcash a Good Investment?

If you like Monero and you are investing money into it, Zcash would be a natural choice for investment as well. They work with very similar principles and if the value of Monero goes up, I believe that the value of of Zcash will go up.

Investing in Zcash or in Monero is, of course, riskier than allocating your money into the stock market but it can also give much higher rewards in the future. Blockchain technology and cryptocurrencies, in general, gave a potential of changing the world. Nobody knows what will be the situation after 5, 10, 20 or even 50 years. Will fiat currencies (dollar, euro, yen, etc.) be replaced by cryptocurrencies? Will banks start going down little by little?

At the moment the future of cryptos looks bright and many people are saying that this is going to be another revolutionary thing after mobile phones and the Internet. As you may remember, there was also a dot com bubble in the beginning of 21st century and prices were extremely volatile in the stock market. Now we are seeing somehow similar phenomenon with cryptocurrencies. Prices can go up or down even 20% in a single day. Recently we saw that the price of IOTA quadrupled in less than a week.

So, anything can happen and I want that you make your research and homework before putting lots of money in. I have a significant amount of my capital in different cryptocurrencies and I’m pretty convinced they are going to make me good money. I believe that some coins will drop “from the race” and it’s a bit challenging to say which one are going to be winners in the long run. I would love to hear your opinion.

Anyway, before we wrap up I would like to offer you another opportunity for making money online. This training has turned thousands of complete newbies into full-time online entrepreneurs all over the world. I am not talking about any get-rich-scheme but a step-by-step online business training. Read more by clicking the link below. I have used it myself for more than 2 years and I’m so glad I found it.

=> Interested in Making Good Money Online? This Step-By-Step Training Will Teach You How You Can Make It!

What do you think about Zcash?

(Disclaimer: All thoughts on this article are my personal opinions, not official investment advice.) 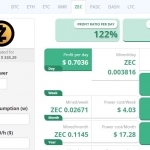