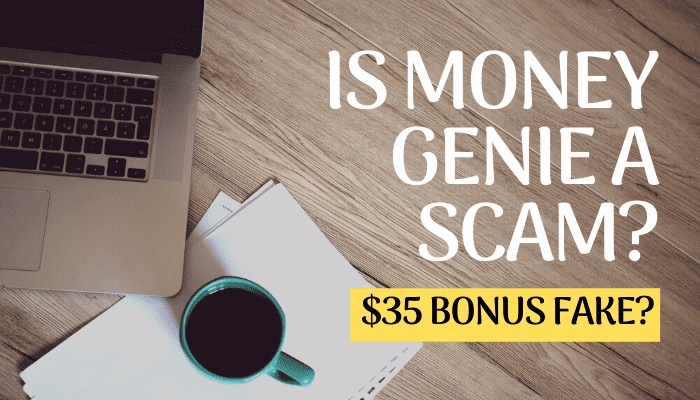 Welcome to my Money Genie Review!

Is Money Genie a scam? If you want to know if this platform we’re going to review is legit or not, you are on the right page.

You might have heard about this #1 social media affiliate network, haven’t you? Just to give you a hint, they claimed to have been existing for 20 years.

But here’s the catch. More and more of these websites exist nowadays, especially that more people are getting into doing petty tasks for some bucks.

Because of the rising demand for these kinds of opportunities, the higher the number of scammers lurk around and fool people to fall into their traps.

Given that it’s done online, they are motivated to reach their scams globally without being seen nor identified. If so, users have to be extra careful with whatever they’re dealing with on the web.

If you don’t want to be one of their victims, you are in the right hands. We’re going to discuss everything about this company, letting you know the good and the bad sides. This is to guide you with your decisions about whether to join them or not.

Are you ready? Let’s dive into it. Shall we?

Type: Get Paid To site 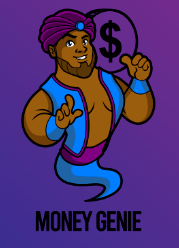 Summary: Money Genie is another sister scam Get Paid To site like Tap2Earn and Use2Earn. The same system of fooling its users by inviting them to sign-up and promises of redeeming a $35 bonus. When the users ask for the payout, the scammers disappear without a trace.

Is Money Genie Recommended? No. Money Genie is a scam. So, it is obvious not to recommend such a Get Paid To site that does only to harm people financially. If you like to learn how to make money online the right way, click the green button below.

What Is Money Genie?

Money Genie is a Get Paid To site. If you aren’t familiar with Get Paid To sites, these are websites that welcome members to sign-up and fulfill the petty tasks assigned to you in exchange for some bucks.

Of course, you wouldn’t earn that much by answering surveys and playing games. Even if you register on big sites like Swagbucks, paying $12 per hour only as the highest payout.

At least, it could be a good way to save a few dollars. But then again, it’s not enough to sustain the substantial amount of money you need for your daily expenses.

That is for the legitimate GPTs, however. Money Genie has a different story. Their intentions aren’t into helping people to make money. They intend to help them fall into financial doubts and bankruptcy.

If you have read our previous reviews about Tap2Earn and Use2Earn, the trio has similarities. As you can see below, Money Genie has a similar website format as the two sister scam GPTs.

When checked, it was found out that these GPTs didn’t even reach 10 years apart from what they claimed. Money Genie, on the other hand, surprises us with its establishment in 2013. But their website registration says 2019.

Money Genie landing page featuring their claims as the #1 influencer

Who Is Money Genie For?

Honestly, nobody. This is yet another scam Get Paid To site that intends not to help other people but to harm them.

Based on my assumptions, Money Genie is a set up to gather as many victims as they could for several reasons.

Firstly, they create a fictional world for their target victims. They play around the “financial anxiety” most of them feel. So, offering an immediate $35 bonus after signing-up is a great strategy.

Secondly, tell unrealistic promises to pay in cycles, well, in fact, what they need is the user’s credit card information.

In my Use2Earn.co review, I mentioned about setting a $500 income as an attraction. It’s a bait for its potential victims to lure them into their trap. Afterward, they take the necessary information and sell them to third parties. 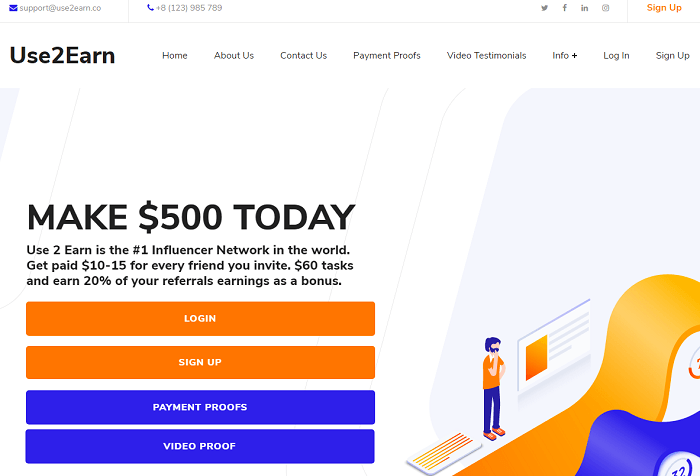 As you can see on Use2Earn.co landing page, you'll notice their $500 promise as an income for their members.

This is how you receive random spam emails, my friend. Your information could be already sold to various scammers who are lurking around to find their next victims.

Lastly, you have to be extra careful with Get Paid To sites that have been reported by users who haven’t anything from them. This situation sheds a light on determining the scam GPT and the legit.

As for Money Genie, they have a lot of victims ranting on various forums I came across with. They all shared the same sentiments, hoping they could disconnect their bank accounts or PayPal accounts from their system.

If you don’t want this to happen to you, stay away from Money Genie. Search for other online opportunities that give you real money. Click the green button below to get started today.

Honestly, I couldn’t pinpoint which angle I should look to see the positive side of Money Genie. Because there’s none. Based on the information I gathered in this post, there’s no doubt this Get Paid To site is a scam.

With that being said, I’ll go ahead with the cons to give you a clearer picture of what this GPT is as per online resources scoured through the internet.

If you think that only multi-level marketing companies have BBB profiles, no. Get Paid To sites are also included in their list.

Survey Junkie is a legitimate GPT site. You can see their profile below, including the warning of an imposter scam site, Survey Junkies (with an “s”).

BBB stands for Better Business Bureau (BBB). Most of the legit companies are registered on the platform to secure their users from a potential scam. With that being said, Money Genie doesn’t have one. 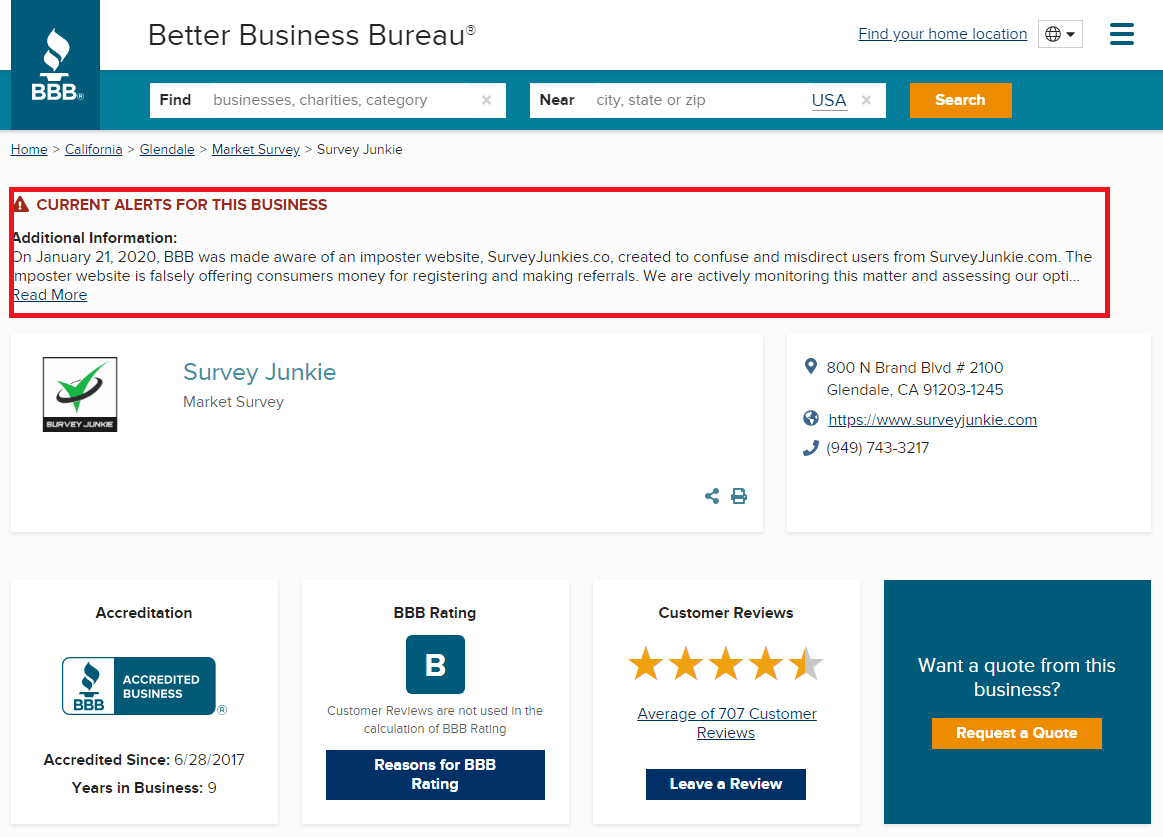 As you can see, BBB is currently investigating SurveyJunkies.co, an imposter site that misleads people from the real Survey Junkie.

One way to tell if the business is legitimate is through searching the owner of the site or the company. Money Genie failed to provide apt information to prove the real owners or at least the persons running the business.

No customer service nor staff recorded.

Concerning my previous point, Money Genie did some noticeable inconsistencies in their background. They claimed to have established the company in 2013 by an unknown group of people.

However, according to WhoIs - presenting the certified date of website registration - the site has only been online in 2019. This finding doesn’t coincide with the “facts” they presented in public.

Money Genie disclosed their office located in Utrecht, The Netherlands. But when I got to check it on Google Maps, I didn't see any office in the actual satellite image as per the address.

As you can see in the photo, you can only notice the regular Dutch houses surrounded by silent surroundings as it appeared. A typical suburban location. 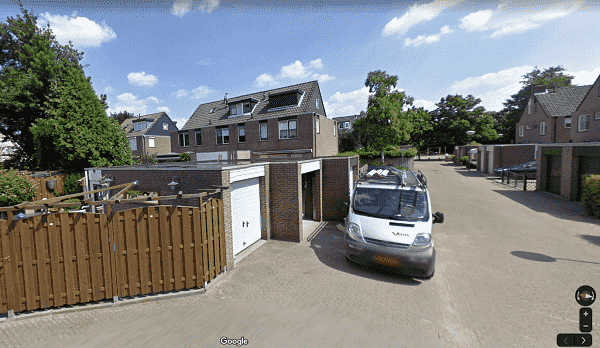 This is what you see once you check their office on Google Maps.

As I mentioned before, many users reported not receiving any payments from Money Genie. These users spent a lot of time working on the requirement, which is to scatter referral links believing this gives them income.

In the end, they’re left with big disappointment because of these.

They claimed to be the #1 social media influencer network, an affiliate network to be exact. But as you can see, Money Genie doesn’t have a large following to support their claim. This is suspicious.

Is Money Genie a Scam?

Yes, there is no doubt about that. According to most of the users who shared their first-hand experiences with Money Genie, they feel disappointed after they realized they are involved in a scam.

According to one of its users named Kevin, he's been waiting for 14 days including the time of his writing. But he hasn't received anything from Money Genie.

Another user named Orji Emydolla supported the claim. "My payment date has passed and I am yet to receive my payment," he wrote.

This is an excerpt from Gig Hustlers' review about Money Genie.

Others became worried about disconnecting their bank accounts to their systems. "I've added my PayPal account already on the site. How do I opt-out and remove it from the site? Please help," a user named David Stephen ranted online.

In response, many users suggested taking immediate action by changing the password, replacing the one used with the connected account.

Earning a $35 bonus at the cost of losing your bank account is not a good thing. This condition alone is enough to make you realize to avoid this GPT as much as possible.

Overall, Money Genie has victimized quite several people around the world, fooling them with their false promises. This isn't how a legit Get Paid To site works.

This is Money Genie's claim as a Get Paid To site. Imagine how much they paid yet they don't have a massive following.

Conclusion - Is Money Genie Worth It?

Based on all the information I put together in this post, there’s nothing else to say except to stay away. This is not going to be worth your time.

Needless to say, Money Genie is manipulating people, especially those who have no prior online work experience or intermediate knowledge of the internet, by luring them to fill in the required information including their bank account.

With that being said, it is best to avoid Money Genie as much as you can, as well as the other scam Get Paid To sites. Before you jump into an opportunity, you have to make sure you research, making sure it is legit. 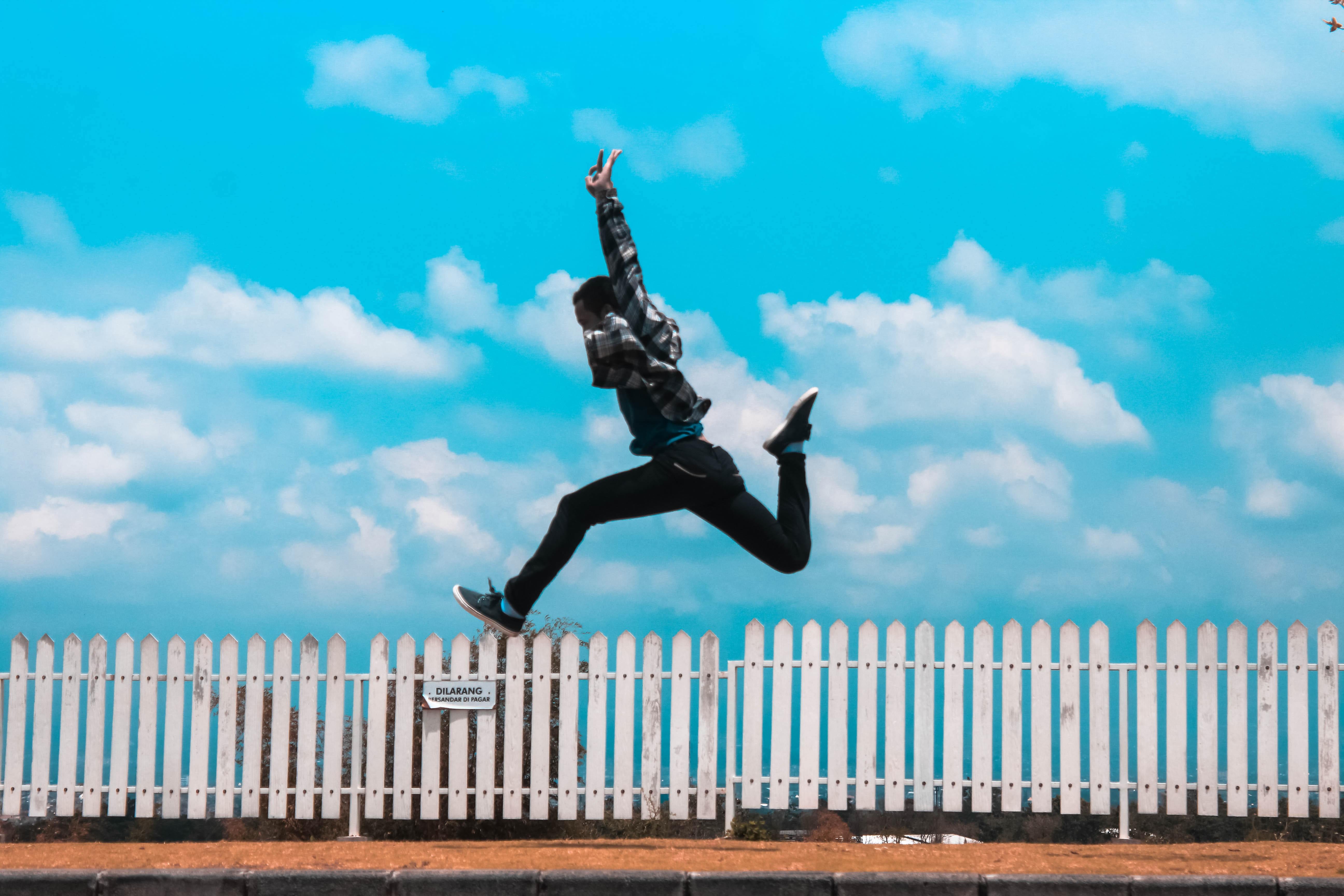 People take action recklessly without researching the opportunity first. Check if it is legit or a scam before you sign-up and do the work.

Oftentimes, people take action by impulse, signing-up for something without guaranteeing its safety and effectiveness. Effectiveness in a sense that a certain Get Paid To site works - not by scamming people.

In general, Money Genie is a scam Get Paid To site. Never believe the high-paying sign-up bonus they promised because it’s only a bait they prepared to victimize.

If you don’t want to do that kind of risk, why not click the green button below to start learning the step-by-step process to create your online business online.

Now that I shared my thoughts on my “Is Money Genie a scam?” post, it’s time to turn the table and ask about your experience, in general.

What kinds of experiences do you have with making money with Money Genie? Is it worth your time, money, and effort?

Do you prefer to begin earning your first passive income through affiliate marketing or you instead invest your time, money, and effort into income-generating opportunities like this?