Is NEM (XEM) a Good Investment? What Will Happen in 3 Years?

You have probably heard of cryptocurrencies like Bitcoin, Ethereum and Ripple. But what about NEM? If you came to this article from Google, you probably have some information of it and now you are thinking, “Is NEM a Good Investment?”

Congratulations! You have come to the right place. I am going to share my findings with NEM in this article and I believe you will find it valuable. By the way, we have researched almost 400 different make money online opportunities on YourOnlineRevenue.com so we have “some” experience of this. 😉

Without further ado, let’s get going!

Before you dive into my text, I want to give you an opportunity to take a look at the NEM (XEM) video that I have uploaded on my YouTube channel. I go through some important points of this text but also explain a few other additional details. I hope  you will enjoy 🙂

Short Review: NEM is certainly among the most interesting cryptocurrencies. Even though it has been launched a bit later than coins like Bitcoin, Litecoin or Ripple, it has made it way to the top-10 with a good reason. Some people claim it’s 100 times more effective than Bitcoin and the value is measured today in billions. NEM owners also contribute to the development by giving votes of new features and improvements.

However, NEM still has its own risks like any other cryptocurrency. If you are looking for a 100% proven way to make money online, I advise taking a look at My #1 Recommendation. 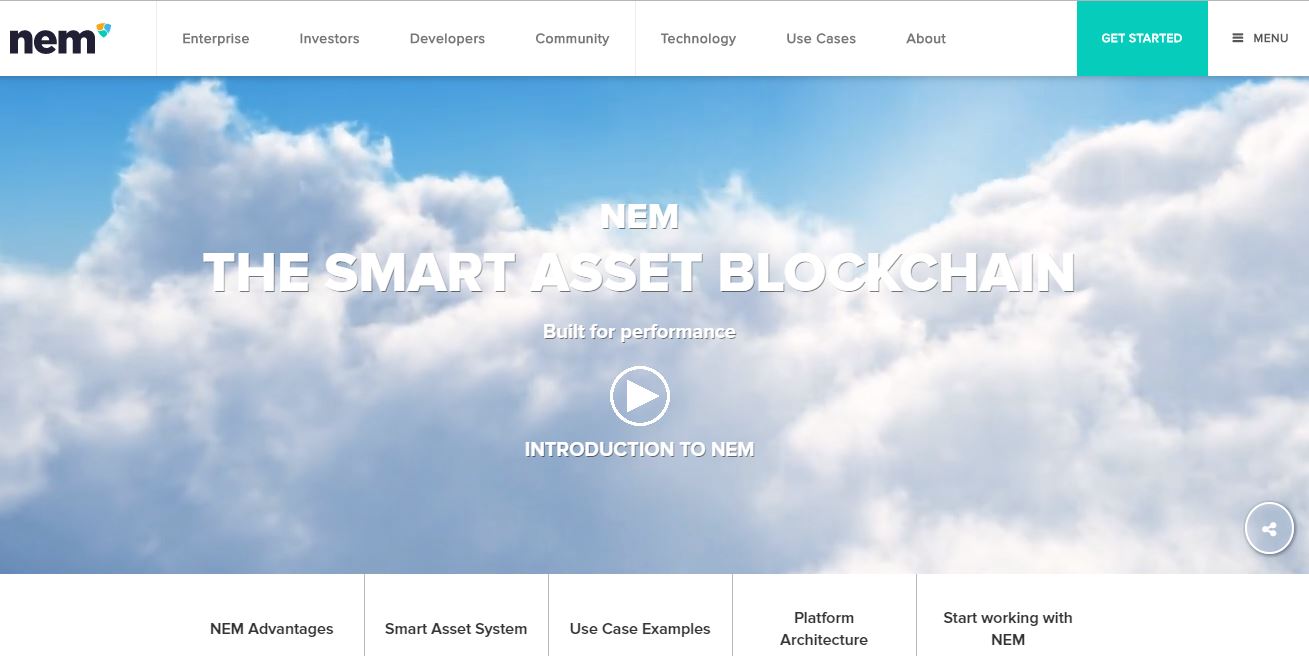 NEM is a peer-to-peer cryptocurrency which is 100% based on blockchain (well, that’s how all of them usually work).

It was launched on March 31, 2015 so it has been around already for a good while. Still, it’s not as old as Bitcoin which was launched already back in 2009. This can be also seen as a positive thing because developers had time to see what works and doesn’t work on Bitcoin so they could create a better option.

NEM is a traceable coin unlike Monero. This has its positive and negative sides. One positive side is that businesses would most likely prefer NEM because then transactions are traceable. They can see who bought which helps them to customize marketing, for example

Let’s take a closer look at some main benefits on NEM in the next chapter.

As I mentioned above, NEM is not mined. Therefore, they don’t need lots of electricity to run and grow. Some cryptocurrency experts estimate that NEM is even 100 times more efficient than Bitcoin.

Transactions are also extremely fast. When you send money to your friend, it takes probably some tens of seconds while transferring Bitcoins can take even tens of minutes at worst. NEM allows hundreds of transactions per seconds while Bitcoin allows less than 10 per second.

This is certainly a benefit compared to less-known cryptocurrencies. It’s not just some idea of a few hippies who want to create some Ponzi scheme. NEM has all the time an active discussion going on their official website’s forum, Facebook page, on Reddit and on other platforms as well.

A great difference to many other cryptocurrencies is that it’s harvested instead of mined. This has a few straight effects in practice but one of them is that all NEM were issued from the day 1. There were 9 billion NEM right from the start and there will never be more.

It means there isn’t any inflation.  With fiat currencies the challenge is that central banks always print more money. So, the value of your dollars or euros on your bank account goes down all every single day. 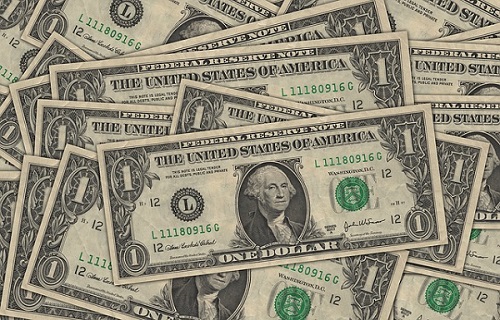 Having cash or dollars on your bank account is probably the worst investment you could ever have in the long run.

You can become a NEM harvester if you have invested enough on NEM. This works somehow in a similar way with Dash. LINKKI

There are certain limitations when you can start doing it but I’m not going into a great detail in this article. You need to have vested 10,000 NEM to become a harvester and 3,000,000 to get NEM masternode.

Once you get to “masternode level” (3,000,000 points) you can become a masternode. You earn NEM when people make transactions. You are like a “bank” in the platform and you earn money based on the number of transactions. This can make you additional passive income.

=> Confused with Cryptocurrencies? Learn a Proven and Secure Way to Make Money Online!

How to Buy NEM?

As far as I know, you can’t buy NEM directly with fiat currency. Therefore, it’s not sold on famous cryptocurrency exchanges like Coinbase or Kraken. There’s is a simple 3-step process how you can get NEM.

Then you can transfer money easily with other people who have a NEM wallet. 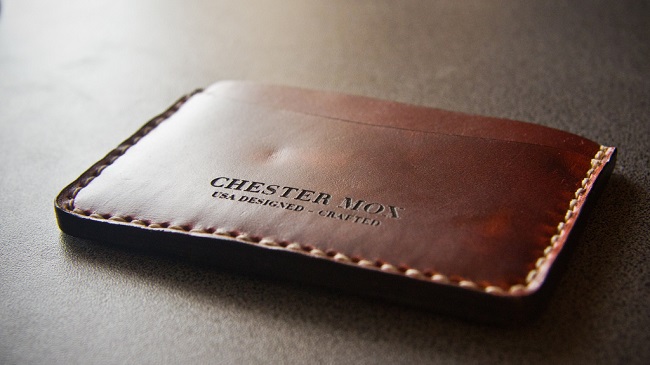 You’ll need to download a NEM wallet to your computer to start buying.

But before you buy NEM, you should think carefully the message of the two following chapters.

Is NEM Worth Buying?

Some persons gave a following statement:

It was dominating the world and everyone thought nothing could beat it. But then the price of one Nokia stock went from 65 to 1,3. So, if you would have invested $50,000 in Nokia, the vallue was suddenly only around $1,000. Who says that the same couldn’t happen to Bitcoin when its competitors make something better.

The price of NEM totally jumped to the sky in the Spring of 2017 like many other coins. It went from less than $0,01 per coin to more than $0,25 per coin. You may be wondering why one coin is still so “cheap”. It’s just because their circulating supply is bigger than with most other coins. There are 9 billion NEM on the market while there are only less than 17 million Bitcoins at the moment. 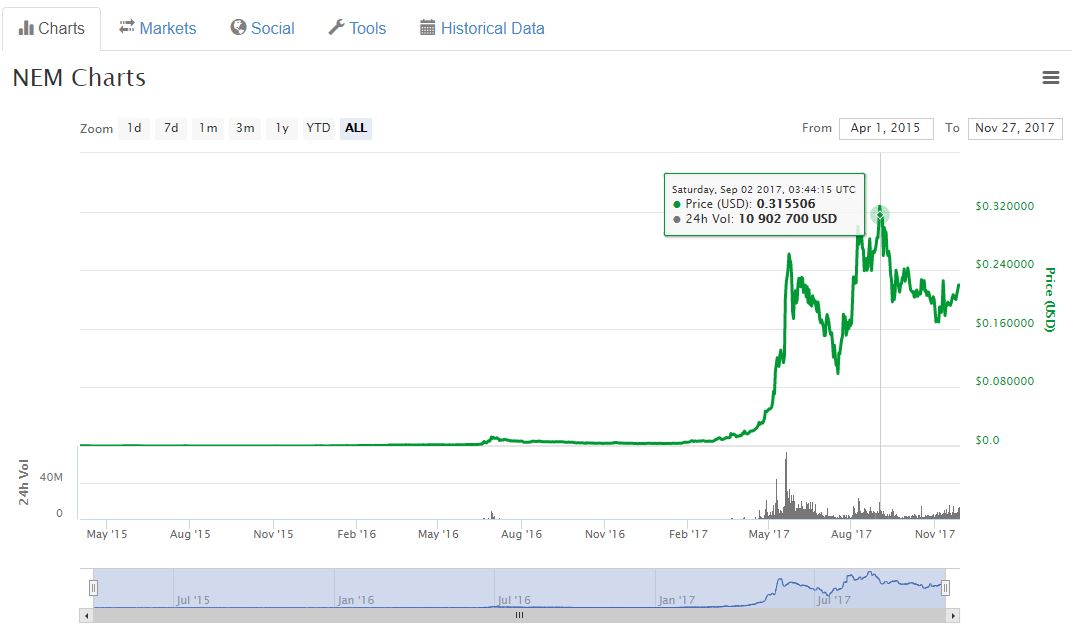 The chart shows the value of NEM during its history.

As you can see in the picture above, the value of NEM jumped to the sky in the Spring of 2017 like many other coins. It doesn’t mean that NEM wouldn’t be worth buying. Whether it’s worth buying or not, depends on the overall value that you give for the coin.

Conclusion – Should I Invest in NEM Coin?

NEM certainly has some unique benefits that other coins don’t have. Its effectiveness is on its own level. In addition, it has a strong community of people who strongly believe in the coin and want to make it even better. If I compare NEM to Dogecoin, for example, I think that NEM would a better choice in the long term.

Personally, I don’t do trading almost never. It’s so challenging and risks are high. I remember when I lost $1,400 in 5 minutes when I was 14 years old in an activity that is a little bit similar to trading. A few months ago I tried forex trading again and I lost $200 in less than 2 hours. However, I have made good money with long-term investing when it comes to stock market, cryptocurrency and real estate. The most successful investors in the world are also long-term investors instead of short-term speculators.

I still hesitate when it comes to investing in NEM. It’s not because I wouldn’t believe in its future but I think that other cryptocurrencies may have even more potential. At the moment, I have the biggest weight on Bitcoin and Ripple. By the way, you can get $10 worth of free Bitcoin immediately as a sign up bonus through my link.

On the other hand, I would evaluate the risk of investing in NEM being somewhat similar like investing to Dash or Monero. At this point is a bit challenging to say which one of the coins will win the race. Which one will be the “Nokia” that falls and which one will be the Apple? I still believe that Bitcoin has a strong position in the battle. It has been around for the longest time, they get the most media attention and there’s a huge community around it.

If you don’t enjoy risk so much or you are just interested in making money online in general you probably want to take a look at my #1 recommendation for making money online. You’ll learn step-by-step everything you need to build a successful online business. Don’t worry if you don’t have any former experience because I didn’t have either. Still this training turned me from a complete newbie into a full-time online entrepreneur.

For example, a few days ago I made +$500 in a single day just by implementing their methods. Not bad, huh?

What do you think about NEM? 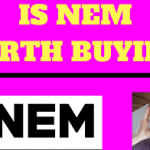