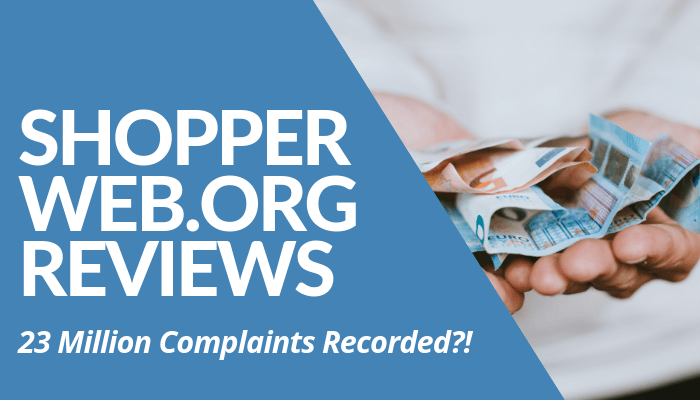 Welcome to my Shopperweb.Org Review!

I know this post is one of a few Shopperweb.Org reviews you’ve seen posted on the web, however, I will give you the comprehensive and brutal, as well as a lengthy review about the company and its whereabouts.

Before I dig into it, I’d like to congratulate you for taking the time to research a legit online business possibility prior to investing. Prior to spending a lot of time and effort to something worth your while and not otherwise.

Are you ready? Let’s dive in, shall we?

Best for: People who want to earn a few bucks while working at home

Summary: Shopperweb.Org is basically a website, considered an online channel, where people learn how to begin earning online by working as one of Amazon work-at-home affiliates and earn money as much as you want.

Is Shopperweb.Org Recommended? No. See our #1 recommended way to make money from Amazon by clicking the button below.

I don’t have to roam around the bush here and tell you straight that Shopperweb.Org does sketchy business with you and others who’ve been jeopardized. Their identity as a company isn’t disclosed on the web.

Further, it has been evolved in different names from AmazonProfits.Org to InternetProfits.Org, which do the same scheme.

On top of that, the founders, who are believed to be Eric and Sarah, randomly calls people around by voicemails telling them they received their resume or application, although they haven’t applied anything. They also tell them they’re from Amazon.

In fact, on Reddit alone, the topic garnered 60 comments in one thread, stating one thing. “I thought it was real. I started filling out the application. I stopped when I was asked for last four of my ss#. This pissed me off cause I had I inquired about a job with Amazon. Whatever happen to people being real and honest?” said one of the commenters.

Shopperweb.org is actually Real Profits Online and is believed to be a fake Work-At-Home Amazon, which is apparently obvious when you land on their website.

Watch our video below to see the truth behind Shopperweb.org.

At the end of the video, we also show you the best way to make money on Amazon.

What Do They Offer?

Shopperweb.Org, like any other fraudulent websites, invites people to sign up in their simple application form on the site and get the “work-at-home” started.

However, when I looked up on their site per se, there’s no information what exactly they’re asking from their affiliates after they do sign up.

After searching online, I’ve come across a woman named Kaly, who mentioned that the person named Sarah called her and told her about the job in Amazon. She explained that the job will pay her around $17 to $32 per hour in exchange for posting reviews on the Amazon site.

Kaly is one of the millions of potential victims of these sketchy activities that has been lurking on the web, targeting fresh college graduates and the unemployed, desperate to earn a steady income.

In Florida alone, there have been more or less 23 million complaints about the same company doing scammy phone calls just as Kaly received months ago.

Apparently, this sounds absurd but there are two unclear options you can take advantage as to how the “company” pays you on behalf of the services you did for Amazon.

If we’re referring to their website, it mentioned that you’re going to register and pay the amount of $47 as a monthly payment excluding the possibility of an increased upsells later on.

As they claim, you can earn as much as $300, $400, or even $500 per day with this weird online trick discovered by mistake. If we try to make some calculations here based on the legitimate Amazon work-at-home business, here’s how it looks.

With an average of $16 for a data entry job, for example, you have to make 31 finished tasks on that day. We’re not talking about a task worth 3 to 5 hours per week here. Because the higher the pay is, the more complicated the task will be.

Now, am I making sense to you?

How To Make Money With Shopperweb.Org

They claim it’s possible to make a passive income worth $500 per day or more with a few mouse clicks. Right after you sign up their form on their website, you’re probably on cloud nine thinking it’s possible.

Even in affiliate marketing or any other type of online business, you have to hustle at least 6 months before you see real results. Not on the spot.

Now, with the question, how to make money with Shopperweb.Org, you can’t. Simple. You canNOT earn a thing with their strategy. First, you’re falling for a scam. Just so you know, in such a fraudulent business like that, you won’t expect Return of Investment on that one. No.

Even though Shopperweb.Org is not legitimate, there are great ways to make money on Amazon even though you wouldn't own any product.

Shopperweb.Org Reviews - What Other People Say About Them?

I don’t want to surprise you but there are over 23 million call complaints from Shopperweb.Org in Florida alone. And over 60 comments from Reddit thread stating this “Shopperweb.Org is a scam.”

Even I, as a reviewer, I can say they’re business is sketchy in my eyes because of clear reasons.

First, their website doesn’t contain the information the potential affiliates have to know. You know the legit website content basics: About the company, Clear Ways To Make Money, and on top of that, a convincing website layout. 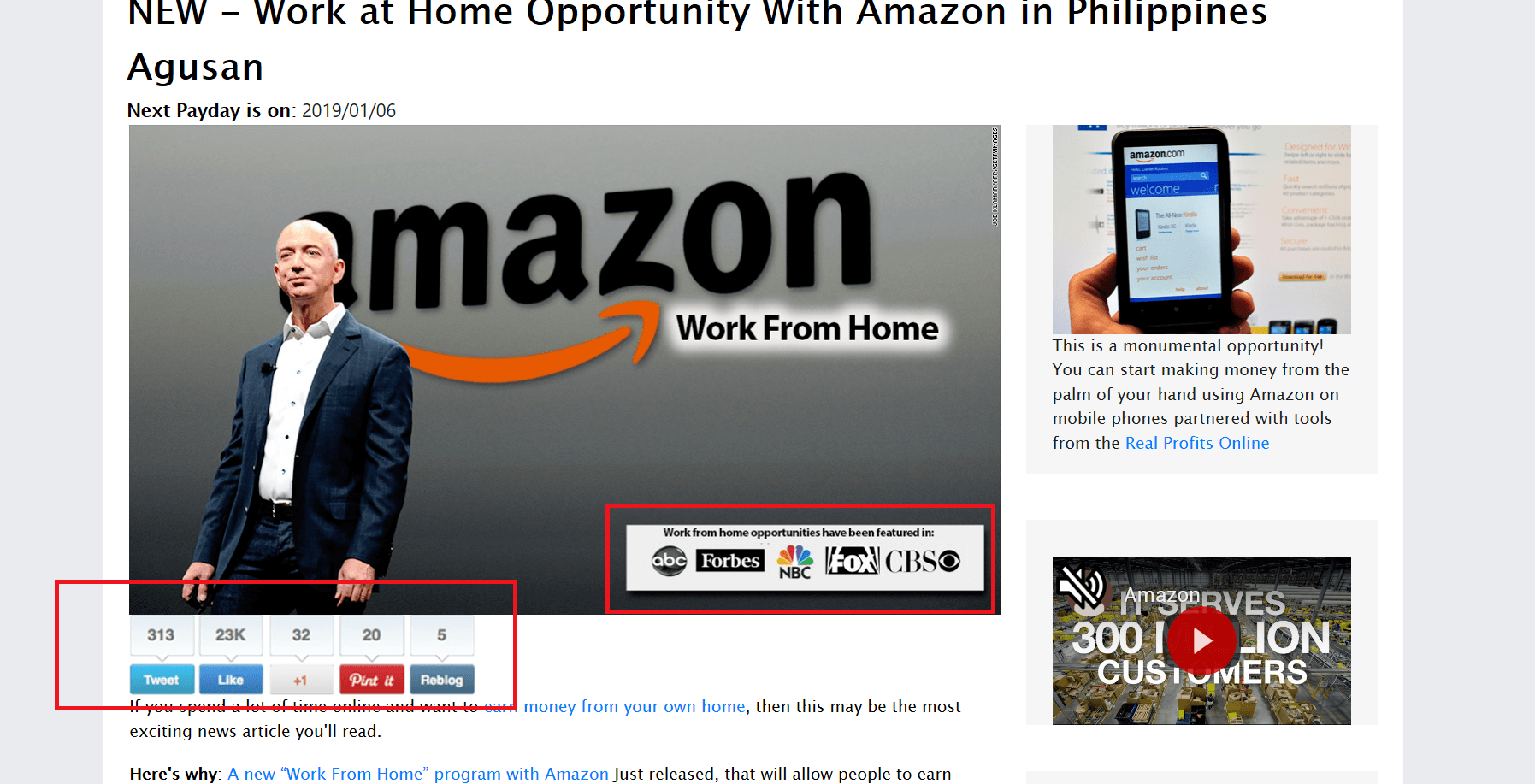 As obvious as it sounds, Shopperweb.Org does have a fake landing page wherein they highlight Jeff Bezos’s image to emphasize they’re “real” Amazon affiliate.

However, they didn’t recognize that they can’t fool anyone with their photoshopped images of several big American companies underneath the photo. Another thing is the fake social media share buttons with the fake number of shares from that page.

How could you earn 3x than any other average income earner with working a few hours per week?

Even Roope, the founder of Your Online Revenue, who’s been earning a passive income as an affiliate marketer since 2015, work more than anybody else can.

While researching, there has been a review stating that Shopperweb.Org asks $47 and up in exchange for a chance to earn more.

In another review, it’s stated that upon a free registration, they can take advantage of working a few hours for an ROI worth of $500 a day.

In short, you really don't know what you're actually investing.

I don’t see the need to elaborate on this one. I’ve reviewed many companies offering products and services to different people.

However, Shopperweb.Org is the most obvious fraud. If you want to verify my opinion, try to visit their website and tell me what you see.

Especially during desperation, anybody jumps into the different possibility of earning while working stress-free. Roope reviewed companies like this like Cash4Invite with similar system.

But in reality, this doesn’t exist and remains a fantasy unless if you’re willing to commit for a 6-month or more hustle to build a legit online business just as Roope does here.

Based on my lengthy Shopperweb.Org review, my conclusion is obvious and definitely, I won’t waste my time and money on such a sketchy company - without clear product or service and fake website with a lot of complaints from the people across the US.

Thus, Shopperweb.Org is a scam.

Look, if you want to make money as legit you can join Roope as he teaches you the legit 4-step proven formula to affiliate marketing that he as well as other A-list online entrepreneurs have undergone to achieve their success and earn thousands of bucks after a long hustle.

Roope has been living his life as a successful online entrepreneur since 2015 when he started Your Online Revenue.

Proof of his successful laptop lifestyle is his endless travel across the globe whenever he feels like it without compromising his work with more than 3,000 individuals he helped.

Get Roope's FREE Ultimate Make Money & Replicate His Success And Travel Around The World!

If you want to achieve the same level of success as an online affiliate marketer just as you desired when joining Amazon work-at-home affiliate, you can grab his FREE Ultimate Make Money Guide and start changing your life now.

Take a look at these people who’s been doing the same process over time and now, they’re enjoying their life running their online business without risking their time and money to the wrong path. 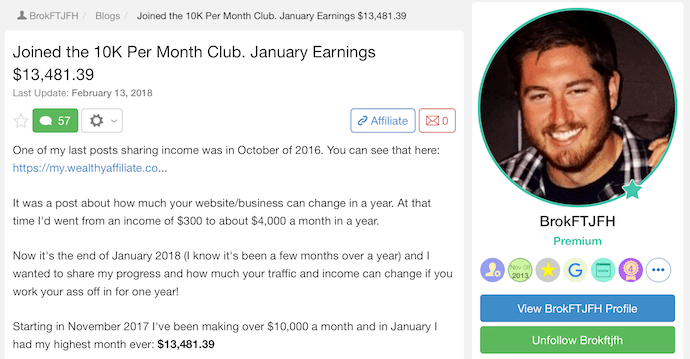 Do you have first-hand experiences with Shopperweb.Org or have been victimized by their awful schemes? If so, what’s your say about the company and their system?

Do you rather invest in this sketchy business or in an affiliate marketing as a jumpstart?

If you feel like you want to learn about making money online, feel free to share your thoughts at the comment section below, including your thoughts about the Shopperweb.Org reviews. Roope loves to help you. So much.

Appen Work-At-Home Review: $116 Per Day By Searching On Google?

Is 5LINX A Scam? 5LINX Runs Under New Company?!