Persistence Is the Key to Success

Over and over again I keep on reading the success stories from people about their online businesses. See for example “$0 to $10k In 3 Years” by a guy who started earning 5-figure passive income from internet after working three years for his online business. Or see this “My First $10,000 Month!” by 20 years old guy who started also earning 5-figure passive income from internet.

There are numerous stories like this but there is one common thing in those stories.

Even though they had challenges, they didn’t quit.

Two Groups – One Big and One Small

If we compare the amount of those who start an online business to those who start making 5-figure passive income there is a big difference. Only a little fraction of the starters will reach the point that they can say “Woohoo! I’m making $10,000/Month.”

What is the most significant difference between Those who reach 5-figure passive income vs. Those who don’t make it?

The Most Significant Difference

When I have read numerous texts from the successful online business people they have always one common advice.

DON’T QUIT! If you want to fail quitting is the fastest way to do it.

Those who have succeeded have been there usually for years. They have seen tens, hundreds and probably thousands of people quitting while they have still continued. They have heard many people saying, “This won’t pay off. I quit.” Probably the quitters have listened too much other other ones who have failed before them.

Successful people have the one thing in common. They haven’t quit. They have had the same struggles as everyone else. They keep on telling about their struggles but now they see their struggles in the new perspective because they have reached the goal.

But most of the starters didn’t have enough patience to wait for the results. 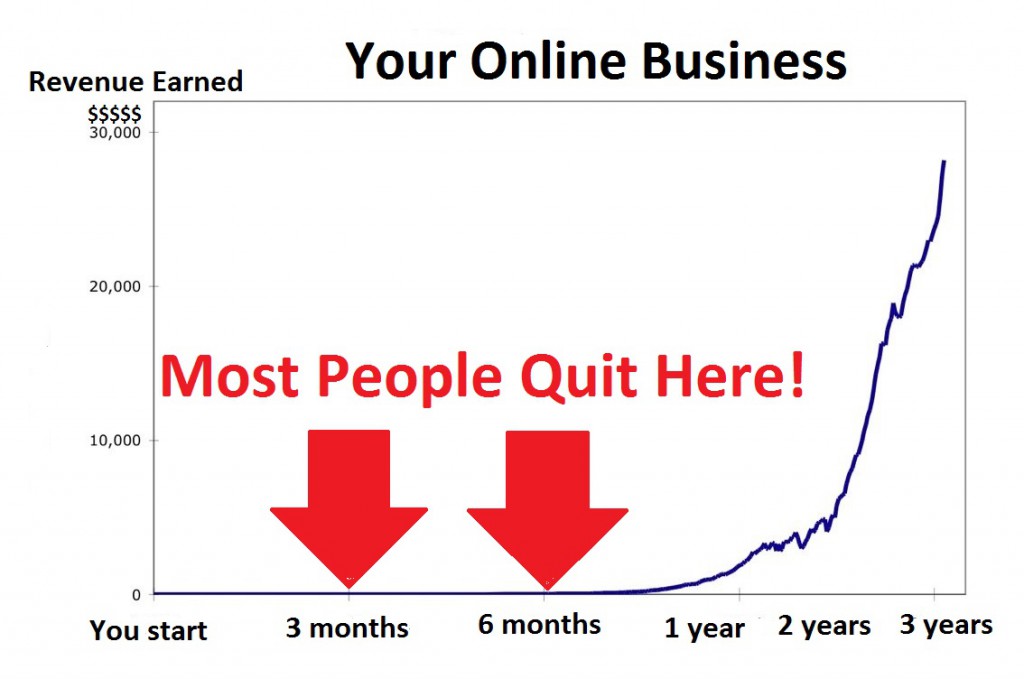 If you go to work for a normal job you will probably earn $100-$300 for the first day. In online business you may have to work three months or more to get the first revenue. (Some people get their first revenue in their first week but that’s now very usual.)

But the reward after a lot of work would be that you will get bigger reward than in the “normal work”. Compare which one would be better:

Here a successful guy in online business asks a question, What if I said that you had to work 12 hour days for 3 years, but then after that you would own a six-figure business and could set your own hours. Would you do it then? That’s a crucial question.

If you won’t to success in online business don’t quit until you make it. Shia Labeouf says in his famous motivational video “If you are tired of starting over, STOP GIVING UP.”

That is the key to success. Don’t give up. Persistently keep on doing the right things until you can reap the harvest.

Think about the times when you have succeeded well in your life. What were keys to success? Share with us!

“Can I Make Money on Youtube?” – Here Are 6 Ways with a Plan of Action.

How to Success Online? – Start from Your Mind!

Is Life Coaching a Scam? No, But You Need to Be Careful!

How to Choose the Right Career for Me? Think Long Term! Read My Personal Examples.